Last Month we spent a couple of weekends at Moon Lake in the camp ground.

We camped right next to some friends who are the campground hosts there this summer.  One of the things we noticed very quickly was the small wildlife.  The humming birds were almost like mosquitoes, they were everywhere and not just a few but all over.  The feeders that were out would have 4-5 hummingbirds on them at a time.

One of the nights we were cooking dutch oven food and decided to ask the friends if they wanted to join us and share in the food and they accepted the invite.

As we were sitting by the fire talking while the food cooked we could look right over into the areas where our friends trailer was parked and they had things fixed up like a little patio.  They had a cover for shade and a table and chairs. 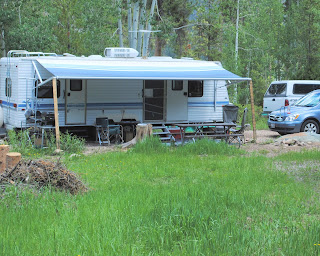 It was only about 30 feet from where we were to the trailer and as we sat there Rachel suddenly asked what the deal was with the watermelon.  There was a watermelon sitting on the table outside the door and it was rocking back and forth.

We went over to see what was happening and found that there was a ground squirrel behind the watermelon pushing it trying to get it to roll off the table.  On the ground right below was another waiting as if he was going to catch it.

It was just like a Chip n Dale cartoon.  It was absolutely bizarre.  If that watermelon had rolled off and hit that squirrel on the ground I doubt he would forget it very soon.  The worst part is we did not have a camera.  I wish I had a video of that.  It would be priceless.

I really do think that these squirrels have spent too much time in a campground around people.
Posted by Harland W Larson at 3:54 PM